On the 31 December 2020, the European Securities & Markets authority (ESMA) switched off the FCA’s access to its MIFID systems. In concert, the FCA launched a discrete and separate system on 1 January 2021.

This Brexit-related transition is significant. Since the launch of MiFID II, the ESMA database called FIRDS (Financial Instruments Reference Data System) has been dubbed the “golden source of reference data” for transaction reporting under MiFID. The database plays a key role in the timely production of daily transaction reports produced by market participants across the UK and EU. To this end, the ESMA FIRDS reference data have to be accurate, complete, reliable and up-to-date as the production of daily reports are produced under strict time constraints. Any inaccuracies in the reference data have widespread downstream affects.

Since the FCA now operates its own FIRDS database, there are two “golden sources” of reference data for which there is a heavy reliance. This places the FCA squarely in the spotlight as the integrity of data in the FCA FIRDS database is now instrumental in the regulatory obligations it had a hand in setting forward.

Michelle Zak, co-founder of Qomply, a leading regulatory technology firm, notes: “The sheer volume of firms and reports being processed means that any disruptions or inconsistent data could negatively affect firms and their reporting ability. The FCA is using its own database for the first time and, with roughly 7 billion transactions at stake, any small disruption could have a major impact. “

The FCA has further disclosed that they have processed transaction reports from over 3,000 unique “executing entities” or, simply put, investment firms and trading venues. At the start of MiFID in 2018, approximately 3,100 individual firms submitted transaction reports, in 2019 this figure rose to 3,600, and as of mid-November 2020, the FCA has processed reports from nearly 3,300 firms. This figure includes not only firms falling under the MiFID regime but also third country entities that have traded on a UK trading venue for which the venue reported on behalf of the firm.

Therefore, any potential issues could affect a significant pool of the 3,000 firms reporting through the FCA.

Currently, Qomply estimates that ESMA is storing 68 million records of reference data and the new FCA database is storing roughly 22 million records as of early January 2021. In the past, ESMA was heavily criticised for the accuracy of the data stored in its centralised FIRDS database therefore the upcoming months will determine FCA’s success in doing the same. (see Germany’s Ministry of Finance’s position paper on MiFID and MiFIR data accuracy)

The ESMA FIRDS database was intended to be the definitive reference for all financial instruments included in the scope of MiFID II. If an instrument or its underlying instrument is found in FIRDS for the trading date, then the instrument is deemed reportable. With Brexit, part of this responsibility of maintaining accurate data is with the FCA.

To facilitate the transparency of data and allow firms to conduct quick reportability checks, Qomply, has released a free service that determines if a financial instrument is MiFID-reportable in the UK, the EU, or both.

Zak comments “Qomply has offered a free service allowing firms to input an ISIN (instrument identifier), a string of ISINs, or upload a CSV file for a specific trade date. The service will report, as of that trade date, the region and reportability of that instrument. Therefore, firms will know, unequivocally, if the instrument was reportable, when, and where.“

This is the only service freely available that queries both EU and UK databases and conducts searches across multiple instruments at once. Qomply anticipates its service will remove the ambiguity of reporting obligations and allow firms to reach back in time to determine if an instrument was reportable in a specific region.

Zak notes “Understandably, any big changes have the potential to be disruptive, at least we can make it somewhat easier for firms to get answers on their reporting obligations in one place as opposed to issuing multiple queries across different locations”.

Freedom of Information Request by Qomply to the FCA.

The information contained in the FCA response is correct as at 17 November 2020.

Please note the number of transaction reports received by the FCA is presented by trade date rather than by submission date.

Qomply is a leading regulatory technology firm offering a complete suite of regulatory tools that address the EU and UK regulation for transaction reporting, sensitive data and record-keeping.

Qomply’s flagship product, Transaction Report Diagnostic Health-Checker and Trade Reconciliation Suite, is a subscription-based, managed service that covers key aspects of the control framework for MiFIR transaction reporting including comprehensive checks for accuracy and completeness, trade reconciliation, over-reporting, and detailed reference data checks. Firms conduct their own periodic comprehensive checks on their transaction reports - both before and after submission to the regulator – putting them firmly in control. 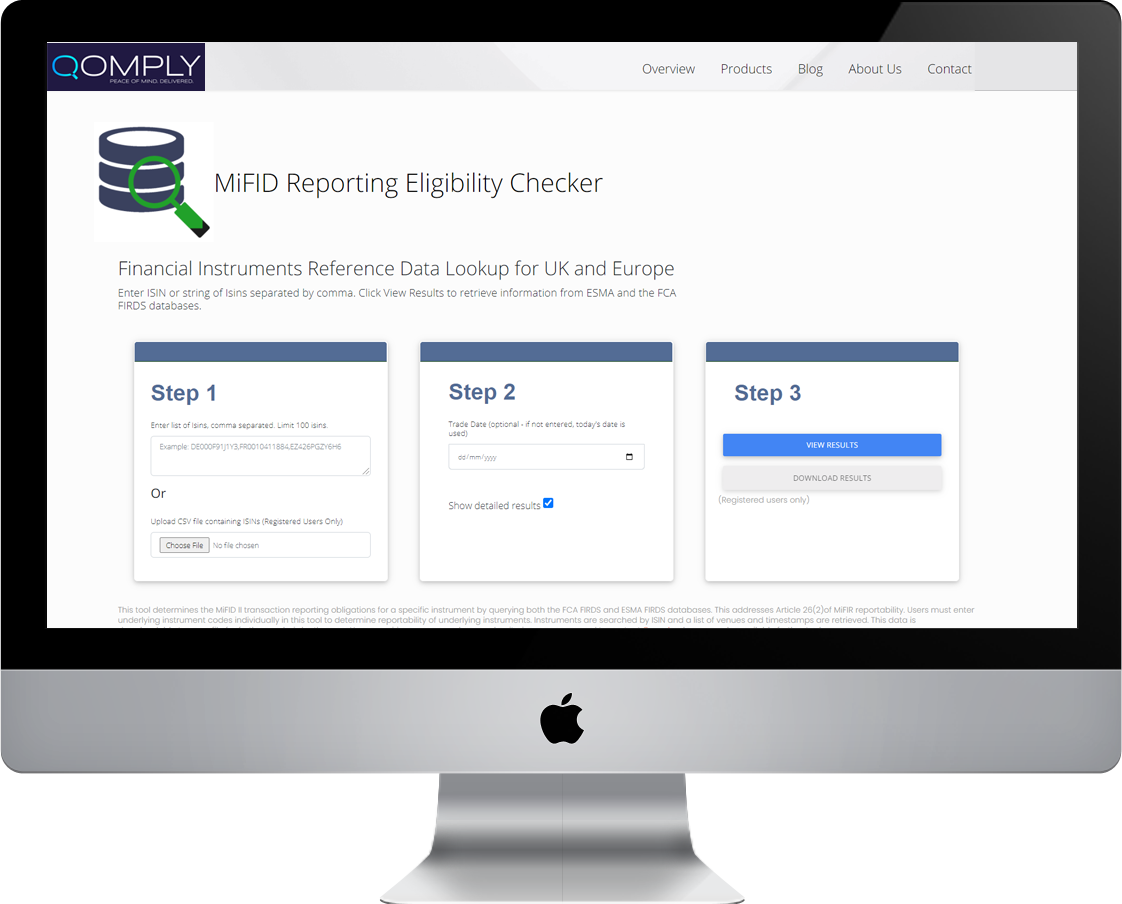